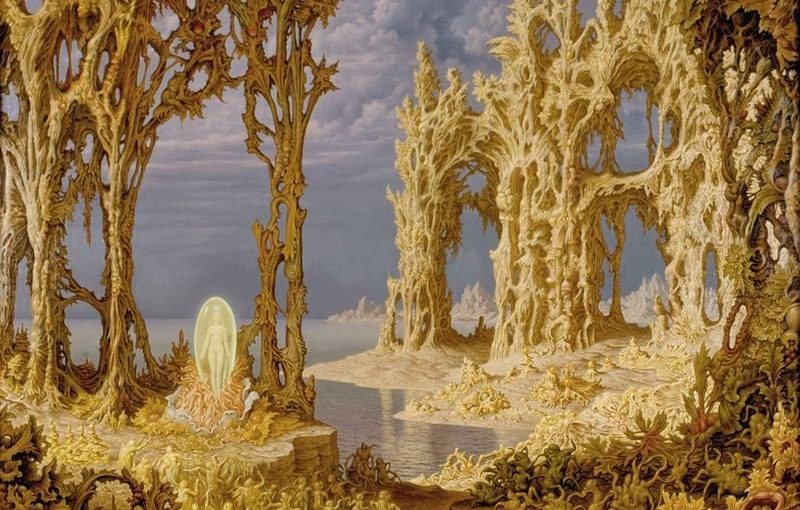 SPOILERS – if I’m running a game for you right now, don’t read any more.

Funny story: this is my second attempt at writing these. The first pass felt really constricted, and kind of based on a load of stuff I’d already established in the setting. Writing these answers down felt like an opportunity to provide more info about the world, for myself and my players – so I had another go. I’m much happier with these results.

Based on this list by Jeff Rients, currently doing the rounds again: http://jrients.blogspot.com/2011/04/twenty-quick-questions-for-your.html

Gods and mortals alike vie for supremacy of the Dragonspine. In particular, the night goddess Selune would appreciate agents to spread settlement and peace, the peace of a moonless summer’s night. Tiamat, the many-headed Dragon queen, senses a kinship with a presence below; he will tear apart heaven and earth to find it.

Three merchants wander the wasteland, wily or tough enough to resist the elements, warring armies and other monstrous threats. The first is Terrokor, a neutral Dragonborn warrior who is finding it easier to sell looted possessions than join anyone’s crusade. He can be found near the roads, though his passage is his own.

There is a wise woman, a Bauba Yaga, living in the north-east swamps who goes by the name Iron’s Wife. She is wily and capricious, and her lair is forever plagued by Rust Monsters keen to eat her works. However, she could certainly provide the work.

There is a Seclusium, oftener in the mountains. The greatest wizard resides there. They forgot their own name long ago.

Many claim to be. None of them can match the Mother of Blades, AKA Gilda Gallantblow, former Queen of Swords, now displaced by her son.

Any of the lords or ladies could claim this title, but most would admit it belongs to Ser Kraskree, displaced vizier of the lost nation of Kalcedon.

The second merchant wanderer is Vixivus Ninetimes, a gnome who’s over nine feet tall. He wanders the Dragonspine trading reagents for a cure to his gigantic stature. He is most knowledgeable in all manner of curses and diseases.

The Chapels of Selune will offer healing, where they can. They are rarely open by day. Their services are at their weakest on cloudy nights, and at its strongest when a full moon hangs heavy in the night sky.

The Court of Wands welcomes any who would swear allegiance and fight for them.

The largest settlement is Railsmark, in the extreme south. The next settlement along the Kingsroad is Hunter’s Cove, an old Troll Market. There is also the aforementioned Terrokor the dragonborn warrior/trader; Vixivus Ninetimes the oversized gnome alchemist

Right now? The Gilded, Gilda Gallantblow’s small army of fans and hangers-on, will gladly lend their services out to prove their worth and claim no fealty to any court.

There’s a number of floating islands where the laws of physics behave weirdly. One of them is said to house an old barbarian who’s set up a tavern. Another is a floating ward-shrine, kept aloft by a spell of anti-magic bubble (the bubble consumes magic and propels the shrine around.) The third is a monastery for an order of mono-eyed fae, for whom iron is allergic. The island’s properties extend their allergies to anyone who comes nearby. (You can join, but it’ll cost you an eye.)

Follow the Kingsroad to find settlements, farmsteads and waystations for weary travellers.

Yes – lots, see above. Some warbands fighting one another across the Dragonspine: House Zephyr, the Colourless Crown, Clan Rauukas, the League of Velvet, the armies of Lord Rigsby, and the Gilded.

Members of all four courts, but mostly the Coins and Swords, have set up an illicit underground arena below Railsmark. There’s also the Amridge Prison, where the inmates run the asylum now.

No-one wants to talk about the Seven Sons, who are said to be courting power from a demon lord to destroy all the Courts and rule in their stead. It’s said there’s only seven true members, but no-one knows who they are. (Edgelords frequently claim to be members.)

Aromatic spices are popular, to spice up meagre army rations. Artisanal distilled potions reduced to a tenth of their potency and drunk in upmarket arcane breweries.

The entrance to the Dwarrowdeln, the ruined passageways of a lost dwarven empire. Not only would the ruins themselves hold no end of treasures, but the passageways would tip the balance of power for any court who controlled them.

The dwarves were led by one they called “The Architect King”. He was, and is, an ancient dragon. His actions have indirectly summoned the courts; their conflict draws in wealth, which his agents hoard for him and bring below. So it has always been, so it shall always be…