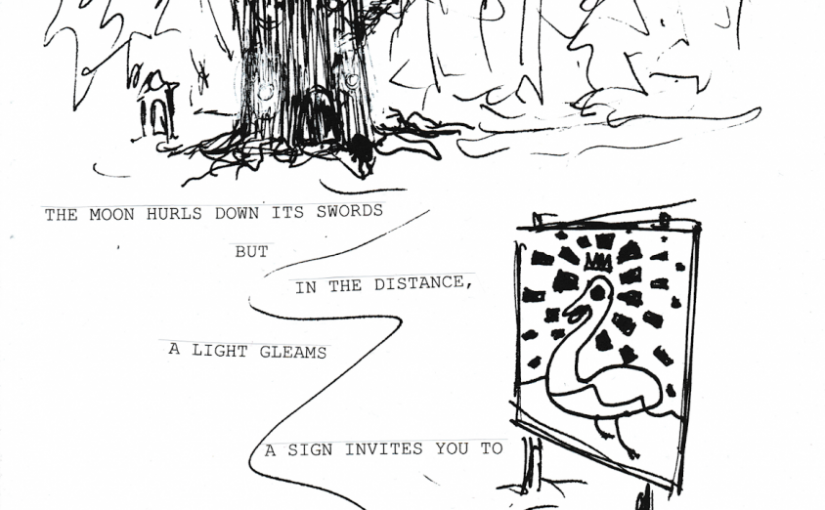 On a whim I picked up A Night at the Golden Duck by Patrick Stewart and Scrap Princess and enjoyed it. The format is sick and I will be stealing it – an A2 page folded down like one of those pocketbooks.

The book part (ie what it’s like how it’s folded) details the characters and some other useful bits inside the inn, which it’s implied you’ve come to at random upon some baleful night. There’s a mystery to solve which is given through the descriptions of the characters, which is then confirmed when you unfold the whole thing, revealing a map and details about the place.

It’s not a big read but it was £5 for the whole lot (including UK postage I think?) and it was sent very promptly in a proper carded envelope. The paper in question is tougher than average as well, so you can fold and unfold this bad boy with impunity. I feel I got my money’s worth, for the price of a pint.

As mentioned the unfolded paper shows off the entire map, which would be awesome as a player aid except the mystery of the golden duck is also revealed right next to it. That’s a pain in the arse, as the unfolded side is too big to use just as a GM aid. I’d have liked the unfolded side to show off player-facing stuff and the book part to be the GM content. I suppose I could just take a sharpie to the thing to hide the relevant content but I’m personally quite precious about the things I buy. That said a few sharpie edits would fit the aesthetic Scrap and Patrick go for, which I’ve loved since Veins of the Earth.

Is it worth getting? Yes, it’s a fun and short read and the content is useful for a wide range of stories and systems. I hope they’ll have a few to sell at Dragonmeet next month cos it feels like the sort of thing that should sell well there. If they do I’ll be sending people in their direction.

2 thoughts on “A Night at the Golden Duck review”