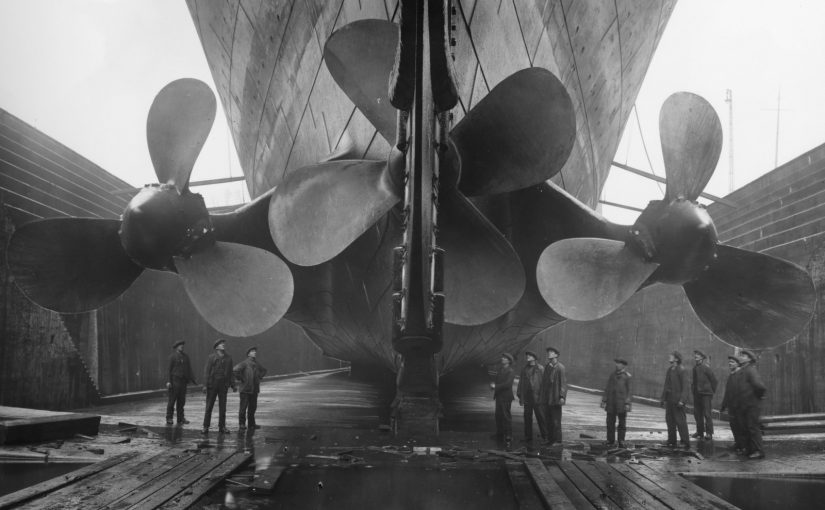 Warning! If you’re currently in a campaign I’m running, there’s spoilers ahead…

Hunter’s Cove is a huge grounded airship a league or so from the ocean. The airship, Le Chasseurs, was the first and last of its kind; an experiment in more fanciful transports than the burgeoning rail industry. When it crashed, it hit the ground with such impact it carved a mile-long scar into the ground. For the longest time, it was considered lost with all hands, only to be rediscovered by the wider world beyond the Dragonspine mountains. The handful of survivors, along with native settlers to the region, turned the wreckage into a settlement.

How Big Is It?

If in doubt, use the dimensions of the Titanic. (This settlement is basically a cross between the Titanic and the Hindenburg, and it’s probably not worth being coy about that to your players.)

175 feet high (35”; nearly 3 feet in Warhammer scale). However, this is from the chimneys to the stern. The wreckage is probably at least a third buried underground, and at least one of the chimneys has been demolished.

100 feet wide. This is 20” wide, which is similar to a lot of gaming mats. You could use a mat to draw out an entire 20×20 square cross-section of the ship/settlement.

Ship Graveyard: The rotting hulks of other old boats, surrounding the region. Generally escape vessels that failed to launch or ill-working rescue craft. (A good excuse to fight undead around rotting boat hulks in the middle of nowhere.)

The Pauldron: The wooden scaffolding holding up and bracing over the buried end of the ship. Forms an open-air market space during drier spells.

Living Accomodation: The ship was designed with, on average, 1000 10x20ft rooms. Arguably this could fit anything up to 2-4000 residents comfortably. More slums exist outside the ship proper, mostly in the lee of the resting vessel.

As the ship is at a perpetual angle, slanted ceilings and floors are common. Most rooms have new floors added over the old (making for useful ‘V’-shaped alcoves to hide things in.)

Port’n’Starboard: The main bar/pub/meeting space. The bar owner is Abel – “everyone knows him, but nobody meets him.” The bar is constantly moving from one place to another (hence the name), but it’s fairly easy to find.

Rumours about Abel: he (?) is actively hunted by the criminal elements in HC, hence the secrecy; the original ‘Abel’ was killed years ago; Abel isn’t hunted by the mob, he’s owned by the mob; There’s a method to the seemingly random places Abel picks out; Abel never existed; Abel is the original captain of the airship; There is a portal to another plane hidden in the bar (even though the bar always moves, the portal moves with it.)

Le Grande Chute: Underneath the blown-out remnants of Le Chasseurs’ port engine room, an attempt has been made to plumb the depths below. The original reasons were twofold: to fortify the foundations of the wreckage and mine local materials. Both objectives have been met with mixed success. The ship’s 2 anchors are the primary hydraulic mechanism powering the elevator, a trip that should be an encounter/adventure in it’s own right. At the bottom lies a slum-like shanty town (Miner’s Town.) Most of the settlers there have caught the Ag (see below) and the parasite is slowly spreading to the regions above.

The Concern and Azsha Cassius

A loosely affiliated criminal organisation who have ruled the city since forever. Their leader, Azsha Cassius, is an embittered former thug with one arm. She has worked her way through the ranks of the Concern by violence and no small degree of animal cunning. While she is too self-serving to be an effective ruler, she is not stupid – her primary interests are maintaining her position. She is more concerned with protecting her own position over the well-being of the city as a whole – provided she gets a cut, she is willing to turn a blind eye to almost anything.

She has an abiding disgust for the Courts of nearby Railsmark, attributing one or all of them to the loss of her arm, though the details of this encounter are lost. The Agaric are a threat to the stability of the city (and thus, her comfort); she would prefer to see them eliminated. While others have tried to impress on her the danger the Agaric pose, she remains somewhat oblivious.

Her followers wear a single crimson sleeve over their left arm (Azsha’s missing arm) to show their affiliation.

How She Talks: Clipped, soldier-speak, no-nonsense. When she starts smiling, you’re in trouble.

How She Fights: Dirty, without remorse or hesitation. Leaves messy examples to serve her interests.

An infectious parasite carried by fungal spores. The Agaric spore lodges in exposed deep tissue, forming an itchy lump on the flesh. If an infected individual dies, the lump will ‘take control’ of the body, turning the corpse into an Agaric Myconid (fungus-zombie.) The spore is not intrinsically fatal unless the spore lands near the spine or neck, in which case there’s a high chance of violent behaviour, seizures, and death.‘The Ag’ is a common problem among the mining community. Remove disease or invasive surgery are effective cures, but both are hard to find in Hunter’s Cove. The longer the spore goes untreated, the harder it is to remove; the spore will build a fatty, tumorous lump of muscle around itself. Removing the spores with surgery generally leaves the victim horribly scarred at the removal site.