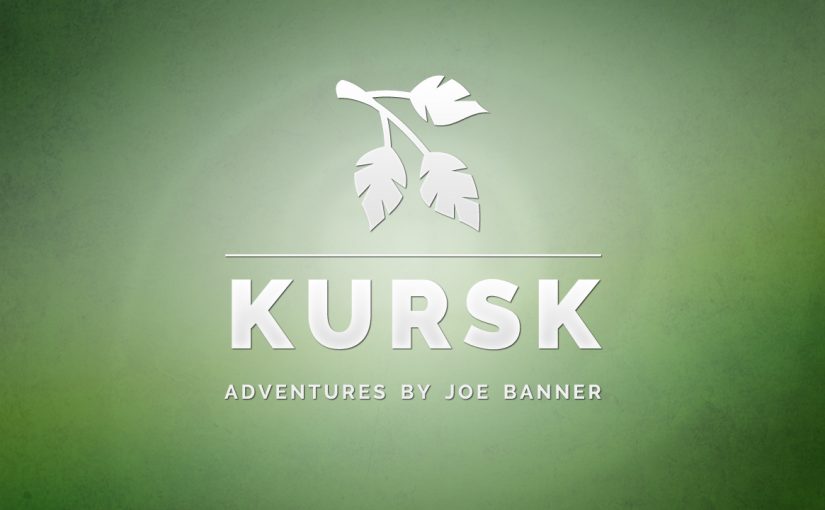 A quaint farmstead of wood and old iron, surrounded by rotting wheat. You might come here investigating strange tales of witches up to no good, or the cursed wheat getting up at night and terrorising the neighbourhood.

The hinterland region of Mirkasa, a few leagues north of the Umberto border. From Nosjad city, you’d travel for about a week through a dozen or more backwoods and villages, until the cold forests give way to rolling farmland. From the Malachite mines, you’d have to cross the breadth of the Iron wastes and likely contend with one or more Templars once you crossed the border.

A witch hiding in the region has cursed the old Kursk farmstead so that every 7th seed – whether planted in the ground or a woman’s belly – will grow fast, foul, and cruel. There’s a few possible suspects as to who the witch (or witches) are. The Kursks are your typical backwater farming family; they’ve got a few dubious secrets, but it seems they’re just in the wrong place at the wrong time.

Waldegund Kursk is the oldest member of the family and something of a matron. She’s built like a brick house and a keen shot with a crossbow; she served with the Mirkasan arbalists in her youth. She mostly keeps to herself, relying on her son to take care of the day-to-day work. She ignores her daughter where possible, or treats her with scorn when she can’t. She hasn’t seen the wise woman of the fields since Lhamia’s birth, but blames her for the current crisis (and any other failings of her family to boot.)

She misses her late husband dearly, and his death is a grim reminder of her own mortality. She wants to keep her family together and safe, even after she’s gone.

If Waldegund is a witch, then she actually wants to live forever with her dead husband and gains the moves raise the dead, imperfectly. The curse is the ‘imperfect’ aspect of her initial attempts. Unless stopped, the curse will spread rampantly while Waldegund and her whole family will live on, in a manner of speaking, right in the middle of it.

Benedict “Benny” Kursk was found dead in the fields six months ago, apparently of natural causes. His loss has been felt keenly by the family, some of whom are coping better than others. His body is buried in a fresh plot by the family shrine. He doesn’t really want anything, because he’s dead, but if someone pulls his soul back from the dead all he’ll want is to return to the grave.

Henri Kursk is Benny and Waldegund’s twenty-one year old son, and the only one still on the farm. With his father’s death, “he’s the man of the house” – but he’s struggling to keep the farm running. Truth be told, he’d sooner sell it, but deep down he wants to make his parents proud, and keeping the farm going is the only way he can see himself doing that.

Solitary, Intelligent, 10 hp 1 armour, 1d8 damage close; Moves: see to the duties in the farm, hide behind his mother’s skirts, display an unexpected act of bravery

Lhamia Marie-Rose (nee Kursk) left the farm about a decade ago with a travelling bard from Chalcedon. The marriage lasted all of ten months, but while abroad she found a new calling in the priesthood of Mareth. Recently, her visions showed the doom of her family line, prompting her return home. But there’s no love lost between her and her mother and ultimately she only wants to witness death first hand.

As part of the duties of her faith, she is tasked with gathering the secrets of the dead. Where this requires magic, she’ll prefer to do this in secret. Any secrets she does learn, she’ll write on a scrap of paper and send back to the church by raven.

If she is a witch, she actually wants to claim the secrets of life eternal instead. In this case, she’ll keep all the scraps of paper with her, stuffed in her robes and pinned to her sleeves. The curse is only the start of her research – if allowed to continue, or conduct it on more people, it will be very bad news.

Mizra’im is an old druid and wise woman from Umberto; bone white hair, skin like old leather. She’s lived in the hills for longer than anyone can remember and helped bring Henri and Lhamia into the world. She’s rarely seen without Anais, her lizard familar. She’s trusted locally, but any templar would regard her ‘wise ways’ with a lot of suspicion. Although kindly, she knows her way with a skinning knife and more than a few poisons too. Ultimately though, she wants to live out her days in peace.

If Mizra’im is the witch, she actually wants revenge against the Mirkasan people for massacring her family when she was a child. Anyone she helped bring into the world (certainly Henri and Lhamia, and a 5-in-6 chance of anyone else thirty or younger raised in the area too) is cursed, and will spread the curse to their children too…

Choose, or pick at random who the witch is before the game begins (between Waldegund, Lhamia or Mizra’im.)

A small, pretty cottage on the edge of the farmstead near the road. Waldegund built it herself shortly after her marriage, for when she needed some space away from the family. While her husband was alive she didn’t use it much; now, she’s hardly anywhere else. There’s a simple pantry, a glass-walled study filled with flowers and a warm study. Mounted on the study wall is Waldegund’s old crossbow, still loaded with a single silver bolt. Spread throughout are several awards and accolades from her time in the army, as well as reminders (pretty stones, a painting or two and other mementoes) of her husband.

If Waldegund’s a witch, hidden under the papers will be a necromantic spell or two detailing how to raise the dead.

A well-built family ranch. Henri is the only occupant, living in his childhood room. The master bedroom is vacant, as Waldegund tends to doze in her ‘guardhouse’ instead. Lhamia’s room has been turned out and has nothing of her former life, so she continues to live in her caravan.

A smaller pasture holds two cows – Svenja and Moo – and a clutch of chickens. Henri takes care of them and himself with what little fresh food he has left.

If Lhamia’s a witch, then Moo – her childhood favourite – will be dead. (Lhamia will pretend to be sad about this, and might even accuse her mother of killing her favourite cow out of spite.)

Two acres of waist-high wheat, green and rotting but somehow still standing. The whole area smells terrible, sweet and sickly like day-old vomit. The ground is slimy and treacherous, though the family insists there’s not been a good rain for a week. You swear you hear rustling all around you, even when you’re standing still. If the crops are cut down, by the next day more rotten wheat will have grown in its place.

If you explore the fields at night, the crops will twine together into shambling humanoid things that want to turn you into fertiliser.

A simple cenotaph of stone and iron, dedicated to the last few generations of Kursks. Inspection of the statue will confirm only Benny is actually buried here; the others all died in one or another of the countless Umberto/Mirkasan border conflicts.

Some Kursk ancestors are Adelai, Travis, Mischa, Benoit, Angelica and Carsten. Carsten Kursk was a famed templar, and war hero of Mirkasa. If you petition the Kursk ancestors for aid, roll+WIS. On a 10+ a spirit answers, and offers what advice or blessing it can. On a 7-9 the spirit offers no aid now, but its blessing when the Kursk estate is safe. On a miss, mark experience and you learn the ancestors spirits have started to become corrupted…

Set up as far from the guardhouse as possible. Lhamia has (or had, see below) a sturdy horse called Brutus. The caravan smells of lavender, and is stocked with texts dedicated to Mareth and plentiful travelling supplies. An untuned guitar that once belonged to Lhamia’s ex hangs on one wall, worth a pretty penny to someone.

If Mizra’im’s the witch, Brutus will be missing (drawn away in the night to stop Lhamia escaping the families fate.) What’s left of Brutus will be found in the fields some time later, likely intertwined with an attacking crop-thing.

A few miles south of the farm, nestled in a verdant swamp. (Think Shrek’s house from the first movie.) The house used to be a two-storey affair, but the lower half apparently sunk into the muck a long time ago. The remaining bedrooms have long since been converted; a balcony window serves as a front door.

If Mizra’im isn’t the witch, the rot will have already begun to take hold on the edges of the swamp. If the crop-things aren’t kept in check, progressively higher numbers of them will assault her home every night.

When the crop-things attack the shack at night, start a countdown (draw six boxes, filling in the first.) Roll Mizra’im’s damage; if she scores less than 6, she fails to drive them off significantly – fill in another box. When all the boxes are filled in, her home is fully corrupted.